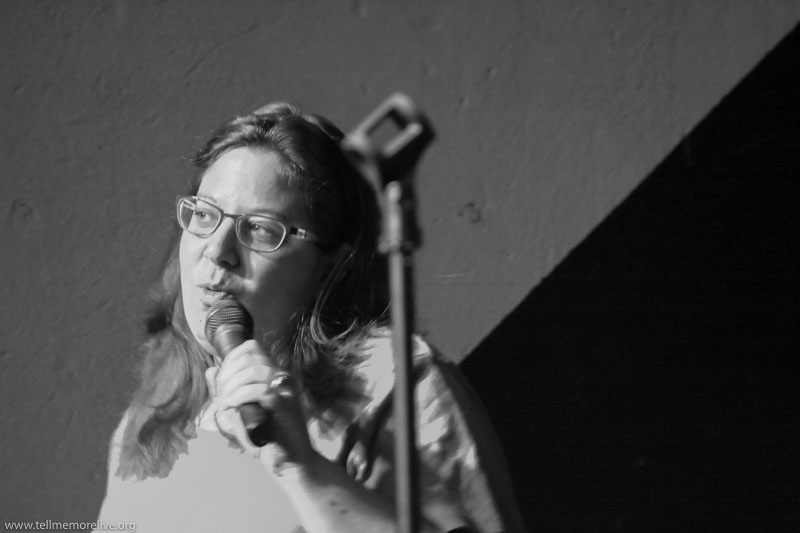 Several years ago, April Shannon Threet had quite a Thanksgiving. One she’s not likely to forget. When she and her drunken friends found someone had broken into her car, that’s when the comedy and drama begins.

April Shannon Threet along with Bryan Lewis, Ryan Quinn McIntire, Alina Sahakian and Patrick C. Taylor came out to tell stories inspired by the word “injuries” and the song “Ambulance,” by Blur. We thought the theme could inspire stories of broken bones and broken hearts, but we were open to wherever it would take them.

Bio: April Shannon Threet was a member of The Pushers and is now the founder of On the Fly, a Hampton Roads improv group.

Content warning: Each episode potentially contains mild to strong language as well as adult themes – including descriptions of sex and violence. This specific episode includes a drunk people but is otherwise fairly clean.
Subscribe to our podcast: iTunes | Android | Stitcher | RSS

About Tell Me More… Live Storytelling: Everyone has a story, and there are plenty of storytelling events and podcasts around the world to showcase them. We’re not that different – except we tell stories from a small stage in a mid-size military town. We host a regular storytelling night at the Push Comedy Theater in Norfolk, Va. We showcase storytellers sharing stories inspired by one word suggested by our production team.  For upcoming shows, please see our schedule here. If you have a story that you think fits one of our themes, sign up here to be considered for the stage.