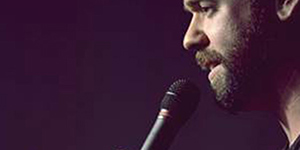 Our storytelling night host Brendan Kennedy took a moment during our debut show to tell us about his less than luxurious trip to The Hamptons. Don’t expect any celebrity run-ins here. Be prepared to laugh.

Brendan Kennedy is a comedian and longtime storyteller. Before Tell Me More… Storytelling Nights and Tell Me More… Live, Brendan organized and hosted a popular storytelling night at the New Belmont in Norfolk. He and comic CB Wilkins produce What’s a Podcast podcast. And both have organized, hosted and performed at a number of comedy nights in and out of the Hampton Roads area. Follow Brendan and CB on Twitter to take in their 140-character wit and wisdom and find out where they will perform next.

Brendan shared his story during our Jan. 18, 2015 debut storytelling night. The theme and word of night was “Journeys” and the song, “Once in a Lifetime,” by the Talking Heads.