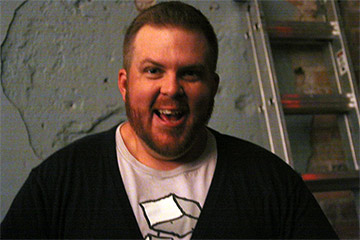 CB Wilkins hams it up before the show. (Photo: Amber Nettles)

Comedian CB Wilkins hosted the show in October, when our regular host, Brendan Kennedy, took time off for a trip to Ireland. (Ireland over storytelling, really?!) Traditionally, our intro includes a short story from the host. This is CB’s intro story. It’s about… a strange sighting on a road trip. Maybe it was just someone wearing a disguise, which would fit the theme of the October show. Either way, thanks for hosting, CB!

CB on CB: “CB’s neurotic, ranting, cathartic comedy style has earned him a hometown following, affording him numerous opportunities to appear locally at the Virginia Beach Funny Bone and Cozzy’s Comedy Club in Newport News, where he runs the weekly Sunday Funnies show. After his first road gig as a comedian, he spotted Bigfoot on the side of a North Carolina highway. In addition to his comedy career, CB is an author, with two novels to his credit, Four-A and Silver Eyes. He is the co-host of the podcast What’s A Podcast? and you can follow him on Twitter @cbwilkinstweets”

Content warning: This one is fairly clean. Maybe not gather-the-family-around clean, but clean enough.
Subscribe to our podcast: iTunes | Android | Stitcher | RSS