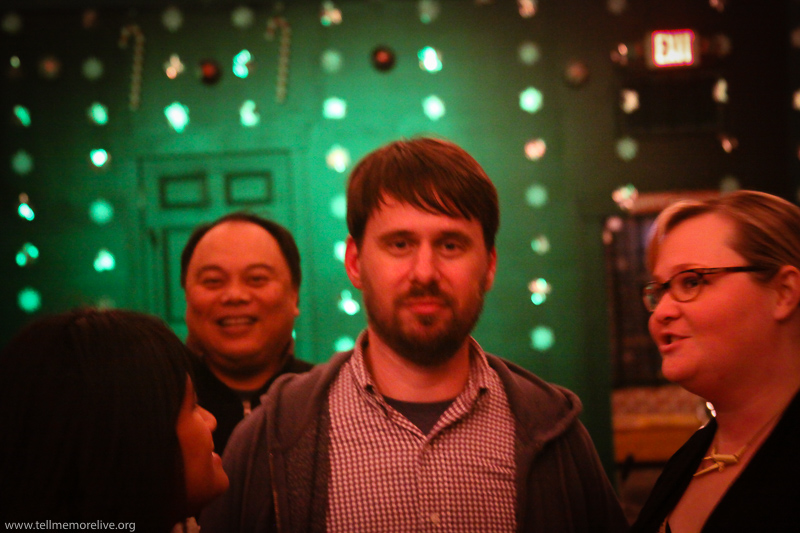 Open mic night. That’s not exactly what anyone had in mind when Tell Me More… Live Storytelling kicked off a little over a year ago. When a storyteller called in sick, we didn’t really have much of a choice, and it turned out to be a good thing. Four people volunteered to tell their story, three of them allowed us to post their story too.

I went first with a possible icebreaker. I shared a story of a trip I took to Paris that, predictably, included a viewing of the Mona Lisa at the Louvre. The unpredictable happened while I was there.

Brian Garraty took to the stage next with a story about a trip home from college.

No one was sure how an open mic would work for Tell Me More. But we did it, and we hope you enjoy it.

Brian Garraty is a regular at the Push Comedy Theater. He is the chief high-five officer of The Bright Side, a sketch and improv comedy team, and a member of the improv team known as The Dudes.

David Mu is a professor Eastern Virginia Medical School. There is one degree of separation between him and a Nobel Peace Prize.

Listen to the stories from our first open mic…

Content warning: Each episode potentially contains mild to strong language as well as adult themes – including descriptions of sex and violence. This episdoe includes some explicit language.
Subscribe to our podcast: iTunes | Android | Stitcher | RSS