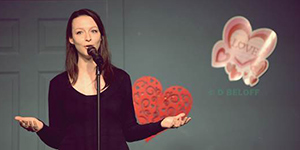 People think Alba Woolard is a cat person. Maybe it’s her grace or her purr, but truth is she has a story about why her love for cats can never be. Alba told her story during the February 2015 show, where the word was “infatuations” and the song was “You Can’t Always Get What You Want,” by The Rolling Stones.

Alba, an Old Dominion University graduate who earned her bachelor’s in acting, joined the sketch and improv comedy group The Pushers in the summer of 2009. As a member of The Pushers, she has performed up and down the East Coast. By day, Alba is a standardized patient educator at Eastern Virginia Medical School.

Alba also produces and directs “Panties in a Twist: The All Female Sketch Comedy Show,” which sold out The NorVa in February and will play again April 25 at The National in Richmond.