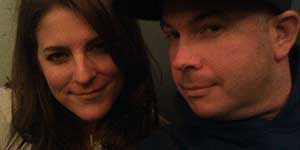 Cat Gendell and Josh O’Brien pose together for a selfie after the March 2015 show.

Actress Cat Gendell tells story about how blind love can be no matter how manically the bright red flags wave. Cat joined us for our March 15 storytelling night. “Loyalties” was the word for the night, and “Lovesong,” by The Cure, was the song.

We grabbed Cat’s bio from the Push Comedy Theater website, where Cat teaches acting classes: “Catherine Gendell is a Hampton Roads native who began her acting career in Chesapeake, studying under Ed Jacob. Upon graduating she then attended East Carolina University where she briefly studied the Meisner technique. She then transferred to George Mason University where she was able to incorporate the Alexander technique and work with many of Washington D.C.’s prominent actors. She was accepted into Mason’s elite ‘Ensemble’ program and graduated with a Bachelor of Arts in 1996. After doing her first professional show at the Theatre of the First Amendment, she moved to New York City, where she was cast in several projects, including a spot on MTV’s ‘Oddville USA’.”

And now for her podcast: