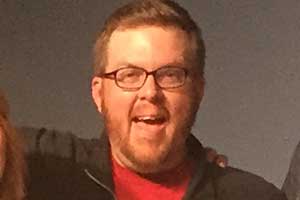 Comedian CB Wilkins joined us in April when we were all awash in the glow of spring before the pollen count tripled. The word of the night was “evolutions.”

CB gave us a story of first love, sex and the long awaited karmic justice. What did he learn? How did he grow? He may be too shellshocked to know.

For his bio, CB sent us this: “CB’s neurotic, ranting, cathartic comedy style has earned him a hometown following, affording him numerous opportunities to appear locally at the Virginia Beach Funny Bone and Cozzy’s Comedy Club in Newport News, where he runs the weekly Sunday Funnies show. After his first road gig as a comedian, he spotted Bigfoot on the side of a North Carolina highway. In addition to his comedy career, CB is an author, with two novels to his credit, Four-A and Silver Eyes. He is the co-host of the podcast What’s A Podcast? and you can follow him on Twitter @cbwilkinstweets”

For more on CB, check out the storyteller Q&A on AltDaily.com.

Now back to CB Wilkins’ story…