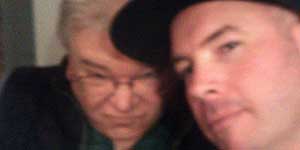 Comedian Dan Ellison has spent years on the road traveling from town to town to make people laugh. While he did so, one friend stayed by his side longer than anyone else. Dan joined us for our March 15 storytelling night. “Loyalties” was the word for the night, and “Lovesong,” by The Cure, was the song.

We grabbed Dan’s bio from the Virginia Beach Funny Bone’s website: “‘THE EDUCATED REDNECK’ Dan began his life in a place that may be considered by many to be the basis for much of his strange view on life, Parkersburg, WV. After graduating high school he moved to Ohio to attend college and received an electrical degree that strangely enough contributes to his comedy. While it may have taken him 27 years to start comedy, it didn’t take him long to discover that this is what he was meant to do for a living. So now after performing in over 40 states and over 1000 clubs over the past 23 years. He has honed his act to a broken beer bottle’s edge. His comedy reflects his growing up in West Virginia. With stories of things he used to do blended with his views on everything from politics to women to kids’ toys. His act can be anything the audience desires. From whistle clean comedy to as dirty as any bar will allow. So if down to earth humor is what you desire. DAN ELLISON IS EXACTLY WHAT YOU NEED!!”

You can regularly catch Dan hosting Comedy at the Cafe, a live comedy event held 9 p.m. every Thursday at Pembroke Meadows Cinema Cafe. For more on Comedny at the Cafe, visit comedyatthecafe.com

And now back to our to our scheduled podcast: