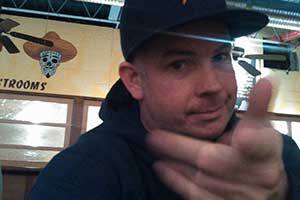 Josh O’Brien poses after telling his story in March.

Josh O’Brien regales with the tale of a fight that broke out during a local open mic. It was comedians vs. sailors. Since Josh had loyalties to both sides of the outbreak, he shares how he picked sides and won.

Josh is currently an instructor at Amphibious Construction Battalion Two where he offers lessons in weapons tactics and various other warfare and general military training. He has been on several deployments from Faluja and Ramadi, Iraq, to Korea and Japan on missions ranging from humanitarian aid disaster relief to SEAL support. His off time is spent as a stand up comedian. He is from Fremont, Ohio, originally but currently resides in Virginia Beach. You can see him regularly at the Virginia Beach Funny Bone and hear him regularly by downloading his podcast, Josh O’s Radio Show.

Josh joined us for our March 2015 show, where everyone came up with a story based on some inspiration from the word of the night, “loyalties,” and/or the song of the night, “LoveSong,” by The Cure.